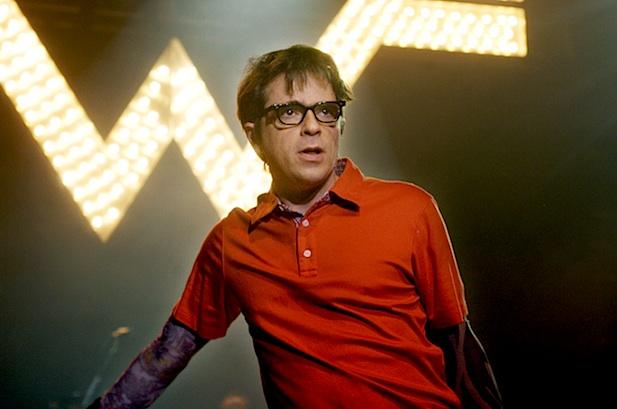 In the front row of Hammerstein Ballroom, I can clearly see Rivers Cuomo’s eyes. They are vapid and distant, with a hint of desperation. Callous even to the deeply personal lyrics of songs like “Undone (the Sweater Song)” and “Say it Ain’t So”, his performance is entirely phoned in. Watching him shuffle mechanically around the stage, his entire presence feels wrong – like an agonized spirit trapped in our realm.

Transitioning into their current power pop repertoire with songs like “Troublemaker” and “Beverly Hills”, Weezer steams along their set like a well-oiled machine. Even the surprises, like crowd-pleasing covers and guests, have an artificial precision about them. I can’t help but think of those animatronic robot bands at Chuck E. Cheese and wonder how it all went so wrong.

The more important question may not be how, but when. I think of Pinkerton.

Oh, the irony of an album lambasted by fans and critics upon release, only to be held a classic a few years later. Oh, the tragedy of producing the second worst rated album of 1996 (according to the esteemed readers of Rolling Stone magazine), only to be credited with creating the emo genre. Oh, the humanity of killing a band, only to resurrect it as a soulless monster.

It could’ve all been different.

To think, had Pinkerton gotten its due, I could’ve been in the presence of greatness. Instead, there’s an empty shell.

When Pinkerton failed, Rivers Cuomo rejected it like a bastard child, calling it “painful” and “embarrassing.” He refused for years to play any of its selections. It’s no wonder that by the time their next record arrived a whopping 5 years later, Weezer was fundamentally a different band. Their ethos had changed; their essence was gone.

The album, known to most as The Green Album, is actually self-titled. In this, it symbolized a fresh start for the band. The relaunch came paired with a more polished look for the boys, with Rivers sporting a pair of his now signature Elvis Costello glasses. At this pivotal moment, Weezer went from band to brand.

The glasses seemed to serve as a buffer; a way to disconnect and prevent Rivers from ever wearing his heart on his sleeve again. They were his resolve to shove as much brainless, formulaic pop down everyone’s throats as possible. He would now helm a mindless power pop train and run it into the ground. Ten years on, it’s a runaway train and people still can’t get their fill. Oh, the irony of being a prisoner of your own abomination.

Given everything, it’s hard not to see songs like “Can’t Stop Partying” as a cry for help. The acoustic version especially captures the essence of Weezer’s current phase as the tone brilliantly betrays the lyrics. A song about oblivious excess becomes a painful epiphany about being a prisoner of circumstance. In this, it harks back to Pinkerton and songs like “Tired of Sex”, but masquerades as power pop dreck. It’s not much, but it’s a pulse. It’s Rivers winking back, letting us know that he’s still in there. Maybe there’s hopes yet.

We all helped to create the monster that rose from the ashes of Pinkerton, but it’s up to Rivers to kill it. Maybe its next incarnation will be the true rebirth of Weezer.