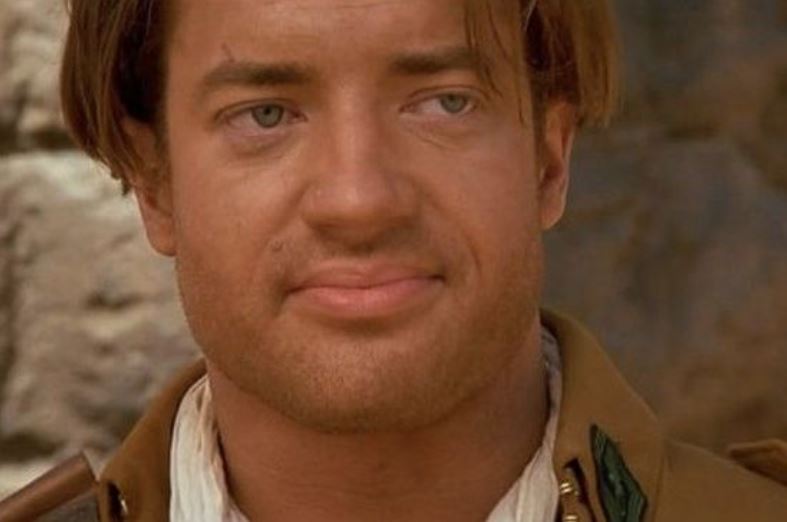 There’s plenty to admire and adore about Fraser, but we need to be aware that at least some of that fandom may be premised on narratives embraced by the notorious incel community.

With his rugged turn as Rick O’Connell for The Mummy (1999), Fraser came to represent a sort of platonic ideal of beauty (for both men and women). As his looks deteriorated, so did his career. Taken at face value, Hollywood and society at large appeared to be rejecting him, premised superficially on his hair thinning and midriff widening. The lesson here appears to speak volumes; you’re only as valuable as you look. 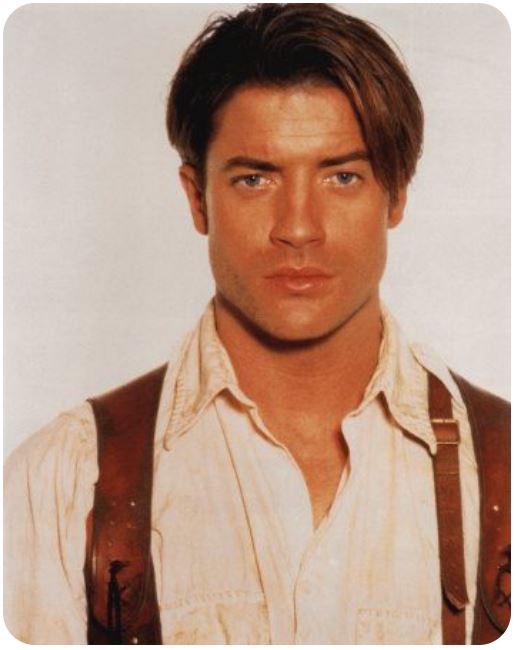 For incels, this is an uncomfortable truth that they often like to trumpet – that attractiveness (or lack of it) is just as much a barrier for men as it is for women, serving to unjustly open and close doors. However, while this is anchored to perceived injustices around male appearance, it speaks to the more rotten, misogynistic core that animates the incel community. Incels often accuse women of being superficial and attribute their lack of romantic success with them to bias over male physical appearance. More than that, they maintain that women don’t respond to “nice guys” and ultimately deserve to be treated poorly.

Afflicted by stunt-inflicted injuries and a waning career, Fraser divorced in 2009, saddling him with a hefty alimony (for his three children). With all these ingredients in the mix, it’s easy to start arranging them into a stock narrative that fits the mold of the archetypical incel folk hero who, despite being a good guy, is undone by female machinations and society’s prejudice against male unattractiveness. It’s the perfect incel nightmare that validates their perceived struggles and prejudices. We can even see these sentiments infect more widely available media: 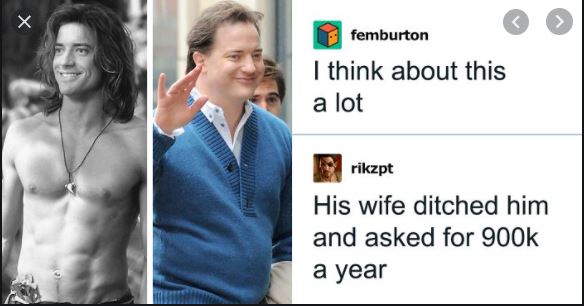 “It has also been speculated that Afton Smith never loved Brendan Fraser in the first place. This school of though claims that judging from the fact that she was almost above a woman’s prime age of marriage, Afton only used Brendan to bear children. In its support, this view cites the fact the crisis arose just after the couple bore their third child and the spousal/child support of $900,000 annually which Afton demanded and received from Fraser.”

In overviewing Fraser’s divorce, the above excerpt baselessly questions his former wife’s motives around their entire relationship. Given this logical leap, it’s not hard to imagine the above accusations of “Afton only us[ing] Brendan to bear children” being plucked straight from an incel forum. So, the odious narrative here is that Fraser was ensnared and financially enslaved by a woman solely to satisfy her means.

We can see the likely remnants of the now defunct r/incel subreddit on r/SAVEBRENDAN throwing fuel onto this narrative. Not only is there unbridled animosity towards his former spouse, but larger accusations of this being emblematic of oppression against men: 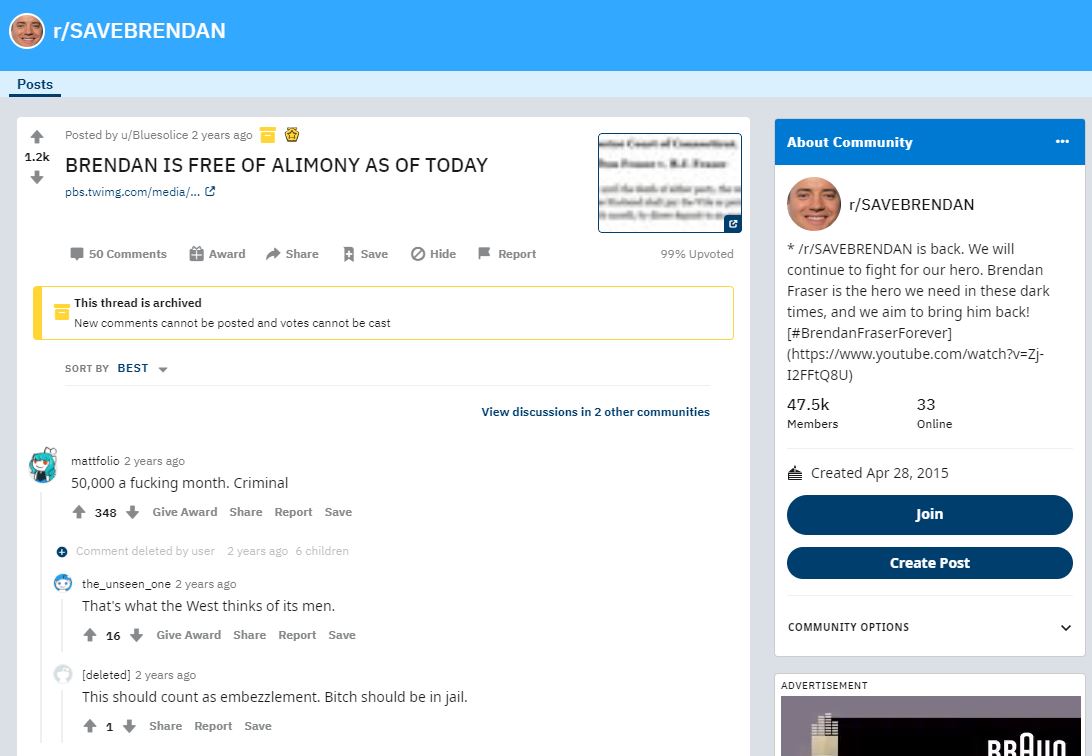 BRENDAN IS FREE OF ALIMONY AS OF TODAY from SAVEBRENDAN

While the r/SAVEBRENDAN community has done well to dissuade these types of sentiments, it’s clear that these voices are out there in the ether and always looking for an outlet. We have to be cautious about how they color and inform the narrative around Fraser’s life and the people in it.

As Brendan Fraser fans, we don’t have to take responsibility for the potential bad apples in our midst, but it’s incumbent on us to, at least, be aware of them. We have to be cognizant that some of Fraser-mania is potentially borne out of and continues to feed into problematic narratives. Just as we need to save Brendan’s career, we need to save his story from being co-opted to spread paranoia and misogyny.